The Royal Canadian Air Force operated it’s own sub-variant of the F-104 Starfighter, the CF-104, of which 200 were built. Made by Canadair the CF version was very similar to the G model in use with many European airforces. It had a different radar specialised in air to ground operations and it had the ability to carry a Canada specific camera pod called the “Vinten Pod”.

Originally tasked with the nuclear strike mission the RCAF 104’s role shifted to conventional strike mission in the later years of the aircrafts service. While the CF-104’s were delivered from the factory without cannon armament the American designed M61A1 gatling gun was installed as in most European 104’s as well as added ECM equipment. Antennae for these countermeasures under the nose and on both sides of the rear empennage are on the most distinguishing features of the CF-104.

The 104753 served with the Canadian 417 Squadron, based in Cold Lake, Canada. The 417 was originally a RCAF squadron formed in England in 1941 and fought in North Africa and Italy. In 1948 it was disbanded only to be reformed 22 years later in 1970 from the No. 6 Operational Training Unit at CFB Cold Lake. There it would train CF-104 pilots until the Starfighter phased out in 1983. Nowadays the 417 serves as a Combat Support Squadron flying helicopters like the CH-146 Griffon in a SAR role.

This particular CF-104 can be found at the Air Force Heritage Park outside CFB Winnipeg. 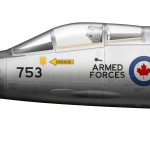 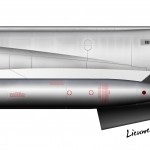 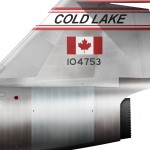