This Italian Airforce Starfighter was part of the 23º Gruppo (23th Squadron) which was disbanded on May 23rd 2010. The ItAF flew F-104s since the early 1960s and operated up to 360 aircraft. The F-104 was officially retired from service in 2004, making Italy the last country in the world to operate the Starfighter. This specific aircraft, the MM6719, can presumably be found today in a town called St. Sophia, Italy. 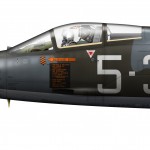 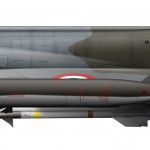