The German Luftwaffe recieved a total 916 F-104s and operated the Starfighter until 1987. It was completely phased out in 1991 after having used the old bird for various testing purposes. The Jagdbombergeschwader 34 (Fighter Bomber Wing 34) flew the Starfighter from 1964 until 1987 after which it was replaced by the Panavia Tornado. This colorful livery was used to commemorate the last flight of the F-104 in JaBoG 34. S/n 22+55. 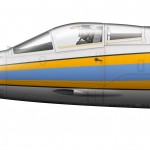 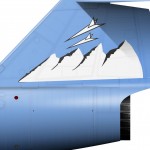