This bird, part of the 93rd Fighter Squadron / 482nd Fighter Wing has its homebase at Homestead Air Reserve Base in Florida. The 93rd was activated during WWII, driving C-47 Skytrains troop carriers. During the war, it was stationed in England and France consecutively. Since the 1950’s the 93rd has been a fighter squadron and from 1981 onwards it’s assigned to the 482nd. 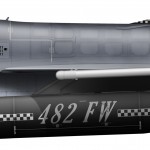 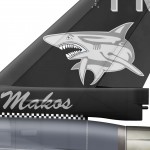