On June 1 we got our first look at the F-35A Lightning II during a Royal Netherlands Air Force press briefing. The aircraft recently made it's premiere visit to The Netherlands and the first crossing of the Atlantic Ocean from east to west. An Italian built aircraft had made the first altlantic crossing earlier flying from Cameri, Italy to Naval Air Station Patuxent River in the United States.

Crossing the Atlantic
The aircraft's ocean crossing was escorted by both RNLAF KDC-10's which had only recently been certified to refuel the F-35. In the KC-10 Extender the United States Air Force uses to refuel aircraft the person flying the refueling boom has a direct line of sight on the recieving aircraft, the Dutch KDC-10 uses a high-tech camera system instead. Tests showed this made little to no difference to refueling the F-35, allowing the KDC-10 to be one of the first partner air refueling aircraft to be certified.
The F-35's F-001 and F-002 flew from Edwards Air Force Base to Leeuwarden Air Base in the north of The Netherlands, stopping over at Patuxent River, on May 23rd 2016. The two stealth fighters were greeted not just by many dignitaries from The Netherlands and other countries who are planning to fly the aircraft or considering doing so, but also by countless enthousiasts and interested civilians.

Experience flights
The main purpose of the visit was to allow local people to experience the allegedly louder F-35. Early reports have the aircraft three decibels louder then the F-16's most inhabitants of towns surrounding the Leeuwarden and Volkel air bases are used to. Technically this would mean a sound level almost twice as loud as the F-16, in practice this difference however did not bear out. Many of the respondents to the survey held in cooperation with the NLR, the Dutch Aviation Research Laboratory, reported that although there were more vibrations the F-35 made a deeper, less disturbing sound then the high-pitched sound the F-16 makes.
The test consisted of the aircraft flying sets of 5 to 7 approaches at both Leeuwarden and Volkel during the day and early evening to allow the maximum amount of respondents to participate in the test. The approaches simulated 95 percent of approach patterns used at the bases in both visual and instrument flying. While F-002 was flying these missions F-001 was used to test wether operating from Hardened Aircraft Shelters posed any risks to the aircraft and persons working on the aircraft. The aircraft was outfitted with sound measuring devices and the engine being run up to normal operational levels in the shelter. Fears that the sound pressure might damage the aircraft of prove uncomfortable or harmful to persons working near the aircraft were put to rest.
The experience flights are an international first and, according to press officer Lt.Col Plankman, probably the first in (at least) Dutch history. "Admittedly," he confessed, "we were a little hesitant in performing the flights and tests because we didn't exactly know what to expect." In a small country like The Netherlands, where air bases are located very close to urban areas, the sound output is a big deal to the Dutch government and, obviously, the residents who live closest to the bases.
"Sure," Plankman continued, "the Americans had tested the aircraft for sound levels at a prior stage, but the fact of the matter is that we have a different climate over here which can affect those results." Despite the different climate however "we had nothing to worry about," reveals Plankman, "The F-35's sound output proved to be within specs."
Later on in the week a photo flight touring some typical Dutch landmarks such as the windmills at Kinderdijk was planned but this has been postponed due to weather. The flights are as much a way of making some PR shots as they are a way to show the aircraft to the Dutch population at large with overflights of Amsterdam and other large cities also planned. 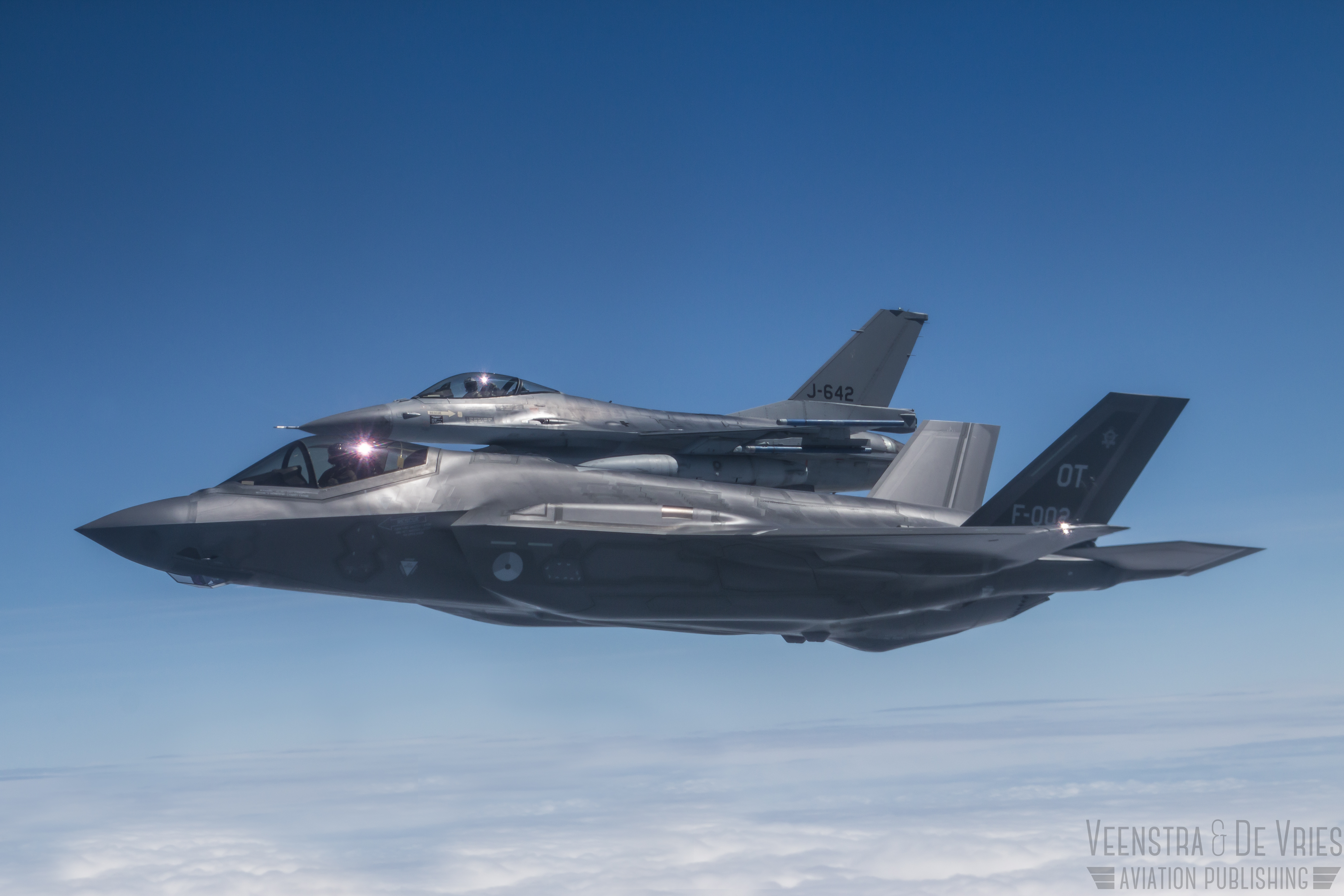 Seen peeking at the viewer over the back of its successor is RNLAF F-16AM J-642. With the arrival of the F-35 in active service with the RNLAF the F-16 will begin a period of gradual removal from service.

The aircraft apparently can attain much higher angles-off-attack relative to the  F-16, with one pilot comparing it to the F-18 Hornet in this regard and beyond. 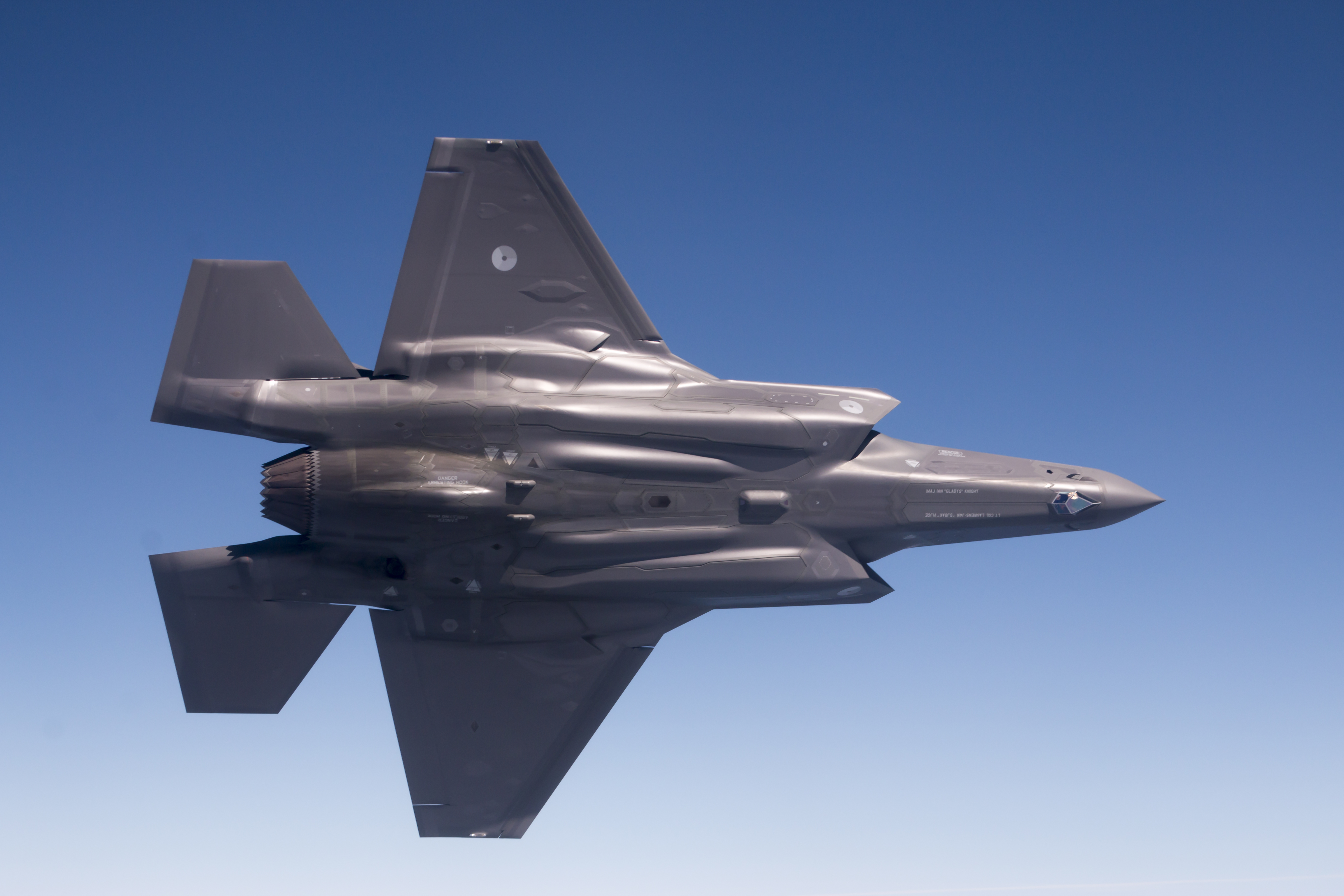 EOTS
This bottom view of the aircraft allows a clear view of the EOTS, Electro Optical Targeting System, array near the nose. This system gives the pilot full 360-degree infrared vision that is combined with information from the aircraft's other sensors. Footage shown during Lockheed Martin's recent press briefing at Leeuwarden Air Base showed a detail and clarity beyond what is often seen in current targeting pod systems.

In one instance, a person doing landscaping was perfectly visible and his rake was clearly recognisable as indeed a rake and not a missile launcher. Another demonstration of the systems sensitivity was the ability to see parking spots on a parking-lot that had recently been used but since vacated. Both features which would appear to be useful in helping spot Improvised Explosive Devices. The quality of the image might allow the pilot to differentiate between a person merely doing road work or a person planting an IED. The ability to spot small temperature differences on the ground might make it easier to find recently buried devices near roads.

When looking around outside of the cockpit, symbols to identify aircraft are overlaid onto the IR imagery from the EOTS in the clip shown during the press briefing. Mike Ryan, spokesperson for Lockheed explains: "The system can differentiate between different aircraft type, distinguishing a F-16 from a commercial aircraft". The EOTS system eliminates the need for any external targeting pod as often used on fighters like the F-16, which would seriously detract from the stealth characteristics of an aircraft.

Different mindset
All this information can be extremely useful and Col. De Smit, one of the pilots present at the briefing, described it as a great advantage over current jets such as the F-16AM flown by the RNLAF. He added that the information advantage and the stealth characteristics did take getting used to: "It's a really different aircraft to fly. The F-35 gives you a lot more information through audio and visual cues than the F-16 does."

Flying the F-16 a pilot often has to assume that the opposing aircraft has the same information that he has and plan his actions accordingly. Col. De Smit: "It's a whole different mindset. When you fly an older fighter you always assume that when you see the enemy, they see you too." With the stealth aspects and the information advantages the F-35 appears to enjoy over most 4th generation platforms such planning is far less necessary, giving the Lightning II a keen edge over any opposition.

Intakes
Moving along further towards the rear of the aircraft we come across the gear doors, all doors on the aircraft are very flush fitting for obvious purposes. The names of both pilots who ferried the two F-35A's to Leeuwarden are displayed on the nose gear doors.

The intakes, which contain a bulge in the fuselage looking like a smoothed over shock cone, are completely devoid of the ramps and other moving parts often seen on aircraft such as the F-15 or the Tornado to control the speed of the air entering the engine. Jet engines have a relatively narrow band of speed for ingested air within which they are efficient. If the air is moving too slowly the engine will have trouble producing thrust, likewise if the air is forced in at supersonic speeds. To control this speed many aircraft rely on varying the size of the intake through which the engines breathes via the use of ramps, much like squeezing a garden hose to make it spray further. The F-35 uses a rampless intake which relies on a shockwave in the intake to keep the airspeed in optimum range.

Though not completely a novel concept, the F-16 has always had a similar system, this does save on weight and complexity. The intakes have been shaped to reduce their visibility to radar as has another part that is hugely visible to radar on most aircraft, the intake face of the engine. The large disc of turbine blades at the front that can often be seen by eye, and thus by radar, through an aircrafts intake is like a big traffic sign to radar operators saying "Here be dragons". In the F-35 the engines' front face has been moved back and is hidden from frontal views by the aircrafts cockpit.

Behind the intakes are two large weapon bays on either side which have space, at the moment, for two large guided bombs and two AIM-120 AMRAAM's. We say at the moment because with progressive development of the F-35's "operating system" more weapons will become available such as the AIM-9X High of Boresight IR guided short range missile. Carrying weapons internally helps keep the aircraft stealthy but does limit what it can carry, at the moment the aircraft can't carry external stores though structural provisions for this capacity are there as can be seen by the many bulges on the wings undersurface. Again this is a feature that will come in future software updates.

Best practices
On the logistical side of things the whole operation of crossing the Atlantic Ocean was a learning experience as well. With the F-16, the Dutch crews instinctively know what to pack when they go on a mission. De Smit: "When we get deployed you can ask a member of the crew what to take along and he'd effortlessly name a set of items and spare parts you'd need. With the F-35 it's a whole new ballgame and so flying the F-35 to The Netherlands is helping us better understand what we need on the logistical side of things."

However helpful, the colonel is also realistic: "With a new aircraft you need a certain amount of flight hours, around 200.000, to know what components need servicing at what moment, what parts break down in a given time-frame and in general get a routine in managing all that." At the moment of the briefing, it was estimated that the 200k-mark would be achieved amongst the international partners in 2018.

"We're also going to order items," De Smit continued, "even though we don't need them at that moment. We're doing that to see how long it takes to get a part overseas and get a good insight in the logistical footprint."

Today, after a three week visit, the F-35's have departed for the States. Here, they will be used to train new instructors and pilots in preperation of the big shift from F-16 to the new fighter in the years to come.